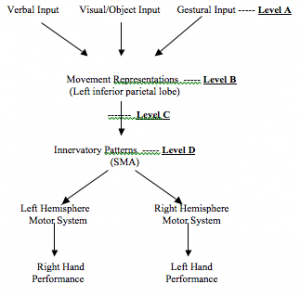 Little support for this (can see anosognosia but cog intact)

THREE LINGUISTIC SUBTYPES: subtypes based on categorization of modern linguistics

Re: if patient can indicate recognition by verbal description or gesture, it’s an anomic disorder rather than agnosia

Hecaen (1961) proposed the first classification scheme for acalculias based on the presumed mechanism of the disorder.

Localization of lesions in the Acalculias

Gerstmann’s Syndrome (agraphia, finger agnosia, left/right disorientation, acalculia) is not associated with any specific type of acalculia. Gerstmann claimed that this syndrome was characterized by an anarithmetria, but others have found that the spatial type and alexia/agraphia for numbers also occur.

Benton (1963) proposed guidelines for assessing number operations. These should be done both orally and in written format:

Additionally, one should qualitatively look for specific error types: