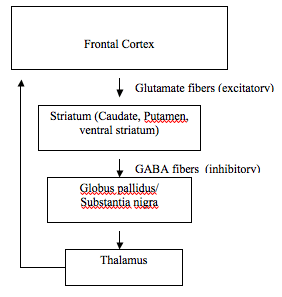 There are 5 frontal-subcortical circuits that provide a neuroanatomical basis for movement and behavior, named by either function or cortical site of origin.

The 1st two circuits are motor:

General control of preparatory premovement activity and serial/parallel processing of movements initiated in the cortex: somatomotor system governing movement of limb and body in space.

Visuomotor system for orienting the head and eyes to the environment.

The other three are more behaviorally related, each with signature neurobehavioral clinical syndromes. 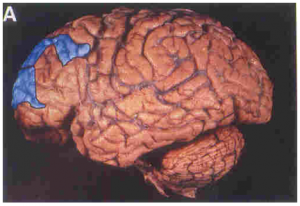 Figure A: Origin of the Dorsolateral Curcuit.

Has two parallel subcircuits Lateral & Medial. Personality Change is the hallmark of orbitofrontal dysfunction, including: 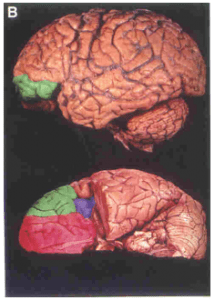 Figure B: Origin of the Orbitofrontal circuit (Lateral in green, medial in red & blue).

Mediates motivated behavior, thus damage to this circuit results in an apathetic syndrome. Bilateral lesions often results in akinetic mutism. Other symptoms may include, 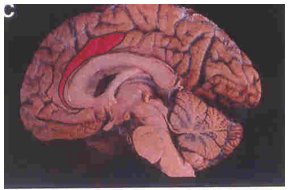 Each direct circuit is modulated by an indirect pathway 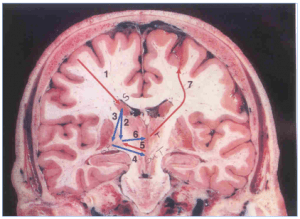 Although each of the 5 circuits comprises a closed loop, there are also open elements in each circuit. This allows for posterior association cortices to affect frontally mediated behavior or to serve as communiction points between the three circuits. 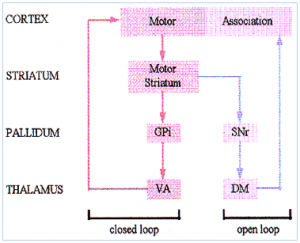 The numerous structures and the many transmitters, receptors, and modulators involved in these circuits account for the observation that lesions in different brain regions may have similar behavioral effects.